Interfilm was one of the many mid-90s attempts to merge live action with interactive gaming. They took things one step further - attempting to reach an even bigger audience with interactive movies.

The set up involved a hand full of theater's arm rests being modded with a 3-button controller. It was basically a choose your own adventure book without any majorly dire consequences - just different methods of achieving the same goal. Audiences were actually encouraged to shout at the screen to affect the other audience member's decisions in the realtime voting. Interfilm became known to me when, while pouring over some old copies of GamePro, I came across this article with some names that seriously caught my eye: the Back to the Future/Interstate 60 dreamteam of Christopher Lloyd and Bob Gale starring in "Mr. Payback: An Interactive Movie." 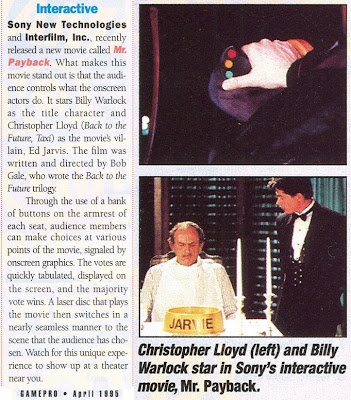 The film was released in February 1995, in approximately 25 newly retrofitted interactive Interfilm theaters, but it was never released in wide release due to the required $50,000+ each theater had to spend to upgrade their screens with the necessary interactive equipment. Viewers were able to sit through three showings of the twenty minute film (compiled from two hours of footage), with no show ever being shown the same way twice.

"Mr. Payback" is the story of some half-witted vengance robot committing the ultimate sin: posing as a human. Mostly it's a vehicle for repugnant fart jokes and sexual innuendo. What was Bob Gale thinking?

Check out the only existing clips from this film:

The scenes splice nonsensically due to the complex and somewhat nonsenscical 3-laserdisc system used to play the movies. These clips are from one of the three laserdiscs.

"Mr. Payback" was the first release from Interfilm, though not actually the first film. The first film was "I'm Your Man" starring former MTV VJ Kevin Seal. Easily the weirdest thing about this movie is that Joe Jackson did the incidental music for it. Here's a very optimistic promotional documentary produced for the film:

Oddly enough it turns out you can actually purchase and play "I'm Your Man" in DVD form. "I'm Your Man" was the third film released, possibly out of desperation, after the Adam West sci-fi bycicle race comedy "Ride For Your Life." "Ride For Your Life" toned down the "edgy" PG-13 sass for a lighter, more video gamey fair. Apparenlty "Mr. Payback" upset more than a few theatergoers:

"That was like watching pornography," one viewer complained after having subjected her preteen daughters to 20 minutes of Mr. Payback.

I thank Joe Redifer deeply for making details of this oddity available to the interweb. 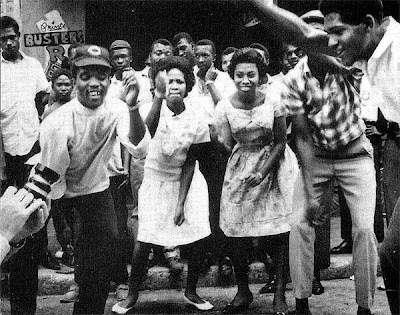 I have always been a fan of dub music and early ska. Now, I don't claim to be at all that knowledgeable when it comes to these genres but I always try to grab a few albums when I find them cheap. What we have here is a real gem! Prince Buster isn't your 2 tone or third wave ska. This is the original stuff baby!

Cecil Bustamente Campbell, O.D. (born May 28, 1938), better known as Prince Buster and less known by his muslim name Muhammed Yusef Ali, is a musician from Kingston, Jamaica and regarded as one of the most important figures in the history of ska and rocksteady music. The records he made on the Blue Beat label in the 1960s inspired many reggae and ska artists. 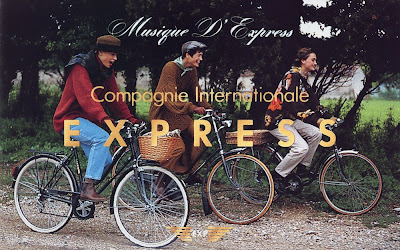 Express clothing stores were the number one source for fashion-savvy American women to indulge in sleek, Parisian style. Conceived as a younger, hipper version of its parent company, The Limited, Express channeled the streamline fluidity and comfort of European fashion. Even their clothing displays were chic. One of my earliest memories in a shopping mall is of an Express display: mannequins resembling surrealist painter René Magritte’s bowler-hatted men with apples hovering in front of their faces, set against red brick walls with silhouettes of cut-out sky behind them. During this golden age in the clothing retailer’s history, Express was miles ahead of the rest of the mainstream. Yet amidst all this thought-provoking fashion there was one key element that cemented and secured Express’ slick ambiance - the amazing playlist of French pop music they piped through their speakers.

In 1990, through Polygram Records, Express released a compilation cassette, called Musique D’Express. The album is rich with the energetic stylings of sophisiti-pop at the ’80s-’90s cusp. Even today its tracks are a lush selection of fresh sounds and artists that most American ears are unfamiliar with. I was six-years-old at the time. I remember the display for the tape next to the register, and I remember my mom buying it. It must seem strange that I have such vivid memories of a clothing store. However, something profound and subconscious was at work. I grew up without MTV, there wasn't a hip older relative bringing the mainstream world to me, and I was too young to pay much mind to the pop culture surrounding me. The tape's attractive harmonies and mysterious, moody lyrics. were a first taste of what I'd been missing. New wave, pop, modern rock and all the other music of the time was trapped in the background as melodies I was effected by but could never capture. I distinctly remember overhearing Phil Collins’ “Another Day in Paradise” and Bruce Hornsby’s “The Way it is” in a grocery store around this same time and being bewitched by them. It was many years later before I ever figured out what the songs were and who was behind them. Musique D’Express was a crystallization of many musical sensations I was only beginning to understand.

Niagra’s “Soleil d’Hiver” glistens like sunlight through glass bricks, Claudia Phillips’ “Picasso” and Luna Parker’s “Fric Frack” are collages of splashy synths and summertime fun, and Pauline Ester’s “Oui, Je l’adore” is a big band twirl through night rhythms and soft focus lenses. Meanwhile, on the opposite spectrum, legendary French singer, Serge Gainsbourg, re-renders the French classic “Mon Légionnaire” into a grungy, grinding funk set to a sexy bass line. The video for the song is a gem of conceptual excess, featuring a smokey factory setting with muscly urban dancers. François Feldman’s “J’ai Peur” shares “Mon Légionnaire”’s dark beat but with a faster, more danceable, tempo. Feldman’s other track on the album, “Joue Pas“, is a duet with the soulful-voiced Joniece Jamison where pop and R&B meet at a compelling middle ground. From the jaunty stroll of Lio’s “Tu Es Formidable” to the dreamy saxophone-lit melodies of Vanessa Paradis‘ “Soldat” and “Joe le Taxi“, Musique D’Express is perfect for any kind of cool you want to be.

I listened to the album all through my childhood, but at some point in my adolescence it got swept by the wayside. When I wanted to find it again, I couldn’t remember the name of the album, the titles of the songs, or any of the artists - I hadn’t paid attention to any of that as a kid. I only remembered the tape itself. With the nagging memory in mind, I spent a good deal of time fretting over finding the tape, or at least figuring out what it was called. I searched online, I scoured thrift stores, I even e-mailed Express and asked about it, but they didn’t know who to go to with a question about a promotion that old. Finally, I managed to type the right combination of words and Google delivered to me an Amazon page where used copies were being sold.

I now present to you Musique D’Express ten succulent tracks (plus the weird little tones that play before the side changes). It is one of the finest compilations of its time, personifying a specific moment in music that is frequently overlooked - a virtual time travel transport to the harmonics of 1990s France, or perhaps a shopping mall somewhere in the past.

Over the years Steven Bochco has created a lot of hit television shows. Hill Street Blues, LA Law, NYPD Blue, and the list goes on. But even KISS and the Rolling Stones had disco songs. If you get what I am saying. Know when to say when!

But then again who thought a show about a robotic little girl would last four seasons?

This is Media Potluck

Duh, you idiot! It's only the hippest place for eclectic media on the world wide web.

A potluck is a gathering of people where each person is expected to bring a dish of food to be shared among the group. Synonyms include: potluck dinner, Jacob's join, Jacob's supper, faith supper, covered dish supper, pitch-in, carry-in, bring-a-plate.

A media potluck is a gathering of webnauts where each person is expected to bring a dish of eclectic media to be shared among the interweb. Synonyms include: wow look at this, choice finds, Jacob's jam, faith supper, deep grooves, pitch-in, an everything pizza, bring-a-thang.

All transmogrified Wikipedia entries aside this blog exists to bring our daily media finds to the world wide web. We have spent our entire lives scouring thrift stores, dying video rental houses, and flea markets in a never ending quest to uncover forgotten music, movies, magazines, and other galactic funk. No matter the quality of the media we post, in one shape or form they are beautiful (and enriching).