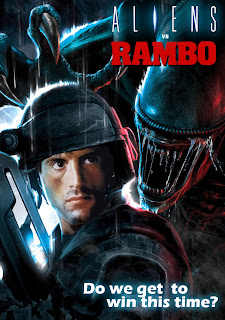 We will be screening two action sequels that have permeated the American cultural psyche and exist thanks in part to the vision of James Cameron. Aliens (1986) and Rambo: First Blood Part II (1985) have spawned countless rip-offs, references, and parodies providing more evidence that Cameron has the ability to create films (and sequels) that have an impact and lasting power far beyond their contemporaries.

Aliens takes the brooding suspense and horror of the first Alien film (1979) and injects it with adrenaline to create a new form of cinematic terror. Sigourney Weaver returns as Ellen Ripley, awakened from hyper sleep after 57 years adrift in the space to find the world she once knew replaced by a suicide mission with a platoon of space marines that takes her back to LV-426, the planet that began her nightmare. We will be screening the 1992 Special Edition. This version adds in seventeen minutes of footage including an alternative opening revealing how the Aliens make their way into the colony on LV-426, the marines using sentry guns to fight off a hoard of xenomorphs, and a subplot involving Ripley's deceased daughter that adds a greater depth to her character. Lock and load or its game over, man.

Beginning the political era of Stallone's career, Rambo: First Blood Part II provides a second chance at the Vietnam war where the the bureaucrats get the boot and America gets to win this time. But before Sly added in his political overtones, Cameron laid down a solid framework that gives recently imprisoned veteran John J. Rambo a chance to reconcile his post-war grievances and document the possible existence of prisoners of war still trapped in Vietnam. The reconnaissance mission ends with Rambo shirtless, oiled up, and firing an M-60 from the hip. If you don't like this film then move to Canada.

Cameron provides two solid stories of damaged heroes getting a second chance to eradicate the demons that haunt them.

RSVP on Facebook.
Non-Facebook users e-mail us to RSVP and get directions at mediapotluck@gmail.com.

We hope to see you there!
Posted by Media Potluck at 11:15 PM 0 comments