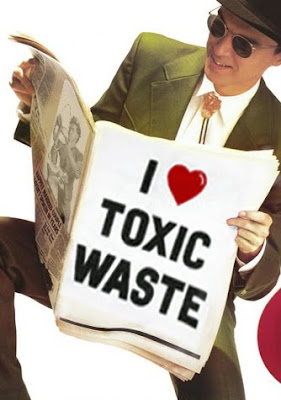 First up is 1985's "Real Genius". This movie, though, similar in format to many of its contemporaries, stands above the average 80s college comedy film. A young Val Kilmer stars as a fun-loving genius working against the system while the government tries to trick him into developing a Star Wars-like space defense program. It's social commentary, big laughs, terrific direction, and an astounding alternative music selection from a bunch of amazing bands that have been forgotten (oh yeah, and Tears For Fears). Directed by Martha Coolidge who also directed the totally awesome, "Valley Girl".

Then we have Cap's favorite film of all time: 1986's "True Stories". The film is written, directed by, and starring Talking Heads' frontman David Byrne. It's a work of art - a musical comedy that observes modern American life in ways no one has before or since. The fictional town of Virgil, Texas is celebrating their state's sesquicentennial with a big talent show. It's tabloid strangeness come to life, it's a completely cool, multi-purpose movie that will leave you forever changed.

RSVP on Facebook.
Non-Facebook users e-mail us to RSVP and get directions at mediapotluck@gmail.com.
Posted by Media Potluck at 4:04 PM 0 comments