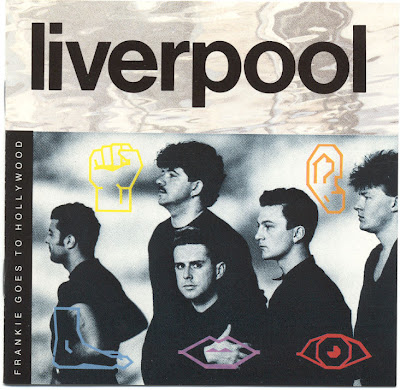 My introduction to Frankie Goes to Hollywood was much like many others. I was first mesmerized by the pulsating bass stab of their hit single Relax. I had heard the track many times prior but hadn't really studied it until I bought an 80s compilation CD that featured the song. Funny thing is, I bought the compilation for the song Video Killed The Radio Star by the Trevor Horn fronted Buggles. Mr. Horn would go on to produce Relax, Frankie's debut album Welcome To The Pleasuredome, and the executive produce one of my favorite albums of all time, Liverpool.

A few years ago I was helping out a local record shop with a summer warehouse sale. I basically sat in a hot industrial sized storage unit filled with the extra stock and memorabilia of a 30 year old record store. It was not a bad deal at all. I would walk out with boxes and boxes full of records. Prime stuff too. Eric, the employee from the shop, would play Blue Oyster Cult 8-tracks for me and we would talk about the weird breathing noises that open, close, and are found throughout Depeche Mode's Some Great Reward.

Somehow we got on the subject of Frankie Goes to Hollywood and he asked me if I had ever heard their second album, Liverpool. He praised it highly and gave me an extra copy he had bought in the bargain bin. I had played Welcome to The Pleasuredome quite a bit. The singles off the album (Relax, Two Tribes, The Power of Love, Welcome to the Pleasuredome) are great but the rest of the album is primarily made up of cover songs. I don't mean to discredit Pleasuredome in any way. It definitely deserves a potluck post. Heck, Relax could be a post all on its own. The bottom line, I was not sure what to expect of Liverpool.

The album opens with the soft syth pads and angelic female vocals that fill their first album, but soon gives way to an enormous and powerful drum roll backed with a thick bass and guitar onslaught. Warriors of the Wasteland, the opening track, has begun. I was completely confused and wasn't sure what to make of it. It sounded nothing like Relax or anything offered in their earlier works. I spent the rest of the car ride home baffled and ecstatic at the same time. Why had I not heard of this album before? Why wasn't this on one of the top album lists of the 1980s? Where Pleasuredome had been some sort of politically influenced sexual romp through all that was conservative, this felt like it was addressing darker issues and building a unique style and audio aesthetic not as present in their first album. 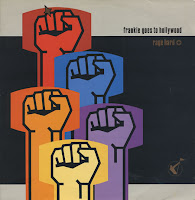 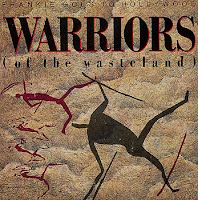 The lyrics throughout Liverpool create a sense of desolation, poverty, and a battle between the the lower and upper class. Pleasuredome seems to be riddled with thinly disguised sexual innuendo but nothing of the sort exists in this album. Instead one gets the feeling that Liverpool takes a sympathetic look at the blue collar worker, a suffering manufacturing industry, and high unemployment rate in the city that shares the same name with the album.

Warriors of the Wasteland:

It seems to be that the powers that be
Keep themselves in splendour and security
Armoured cars for megastars
No streets, no bars, yours wealth is ours
They make the masses kiss their asse(t)s
Lower class jackass, pay me tax take out the trash
Working for the world go round
Your job is gold, do as you're told
The pay you less then run for Congress

In the common age of automation, where people might
eventually work ten or twenty hours a week, Man for
the first time will be forced to confront himself with
the true spiritual problems of living

The album retains many of the elements that make Pleasuredome good and builds upon them to make Liverpool great. The percussive bass lines of Mark O'Toole are present and Holly Johnson's unmistakable voice shines, marking the tracks as uniquely Frankie. Just because guitars and live drums are the name of the game on this album, it doesn't mean synthesizers don't play a heavy role. Every track on Liverpool features some form of electronic flavor, achieving sounds only capable with machines. Both albums share a heavy use of orchestration, which appear more extensively in the extended and alternate mixes on the what seems like uncountable number of 12" and single releases across both albums.

Both albums share a unique art direction. The albums and singles are covered in cryptic messages and photos that often seem to have little to do with the content inside. Liverpool continues Frankie's tradition of outsider music videos with several stunning (albeit odd) videos:

It has been said that this new direction into the area of rock and dark lyrics, over synth and tongue in cheek humor, was a decision made by the other members of the band against lead vocalist Holly Johnson's liking. In fact, it is partly blamed for the eventual break up of the band and poor sales of the album. But after the popularity of Relax, and the advertising monster that was the "Frankie Say Relax" shirts, how could anyone be expected to top that? It is rumored the band expected it to be as popular and at one time had been their intention to name the album Liverpool... Lets Make it a Double. It is a shame that for an album that takes such leaps and bounds beyond its predecessor, Liverpool has not received more recognition. It may be that the album was doomed from the start, forever to be overshadowed by Relax and eventually swept under the table with the decadence of the 1980s. 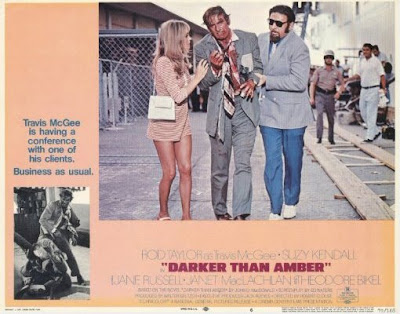 I recently became a fan of Travis McGee.

McGee is the creation of famed Floridian author, John D. MacDonald, and from 1964 to 1984 he starred in 21 novels. He lives on a houseboat in Fort Lauderdale, Florida (my hometown) and takes it easy until he runs out of money. When that happens he does what he refers to as "salvage" - helping people get back what's rightfully theirs and keeping half the value for himself. Over the course of the novels McGee's character grows and changes as does the ever-present backdrop of Florida. McGee and MacDonald are prolific modern literary figures and I feel like a mook for not knowing them sooner. MacDonald was Carl Hiaasen's literary progenitor, the boat slip where McGee kept his boat, "The Busted Flush", is a designated literary landmark - all this in my own backyard. I set out to do some research to make amends for lost time, and in doing so I found this:

Travis McGee in action! The climactic fight of "Darker Than Amber", a 1970 film directed by Robert Clouse ("Enter the Dragon") and starring Rod Taylor. This fight scene blew my mind and, it turns out, is regarded as one of the greatest fight scenes of all time. You can see the rawness in this fight - it's manic, it's real. Taylor and his co-star, William Smith (as the villainous Terry), used no stunt doubles, few precautions, and actually traded blows. 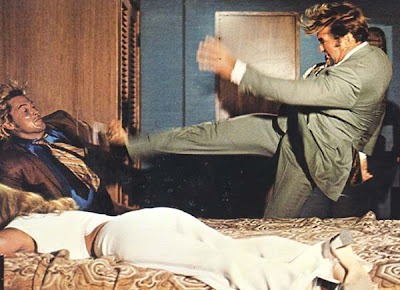 When he whacked me with that board, he missed the knee pad and hit me right there [indicating a spot just below the knee]. To this day when I talk to him, I accuse him of doing it on purpose. Luckily that was the last take of the whole movie.

Smith's character, Terry, is a perfect maniac villain. Check out how easily he looses control:

Unfortunately, those two clips are all that exist on the Internet, and "Darker Than Amber" has never had a proper home video release. Most versions are censored, missing the bulk of that exceptional fight scene. It's never been released on DVD. The only uncut versions available are bootlegs with Dutch subtitles. Wikipedia claims that "pristine American prints disappeared years ago." This movie looks too awesome to be kept from the viewing public. Perhaps if the long-rumored movie of the first Travis McGee novel, The Deep Blue Goodbye, gets made we'll get to see "Darker Than Amber" released in all its glory.

In the meantime, check out this great article about MacDonald and the McGee series: John D. MacDonald: Florida's Master of Mystery by Sue Henry, and then pick up one of his novels. 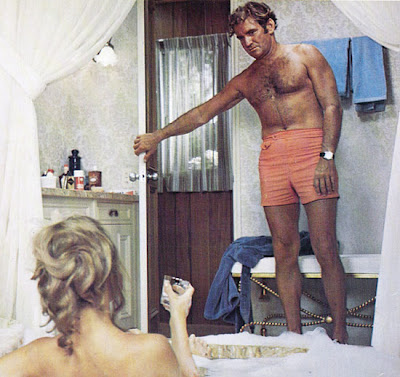