JUNE IS GOING TO BE COBRA MONTH! All next month we will be posting Cobra related articles and content, culminating in a Cobra viewing party. Check back for more details! 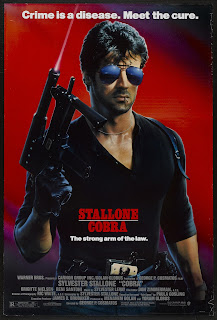 A few months ago I was talking with my buddy Jim DeSantis who runs the podcast Movie Brain Rot and somehow our discussion moved to Sylvester Stallone's film Cobra. (Honestly how many conversations don't?) We started throwing around facts about the film and realized the world may want to know and share the joys we have experience getting a better understanding of its place in our nation's history and pop-culture psyche. So we sat down and made it happen:

Keep up to date with Jim's other podcasts on Twitter. @moviebrainrot

In 1985, Stallone was coming off of two extremely successful films in two well know franchises, Rambo: First Blood Part II and Rocky IV. As previously mentioned on this blog, Rambo contains a strong political message as our patriotic hero gets a second chance to go back to Vietnam and "win this time" in a war that was lost by politics and spineless bureaucrats. Again a similar theme is displayed in Rocky IV as Stallone defeats the communist juggernaut Ivan Drago and changes the heart's of a nation as he delivers a speech on change, while wrapped in an American Flag. Cobra (1986) continues what I like to call the political trilogy in Stallone's career, tackling the issue of crime in America and the bureaucratic rules and regulations that prevent the police from combating the every growing violence. The opening monologue:

And so begins an hour and a half of of Marion "Cobra" Cobretti shooting, burning, and tackling crime by his own rules. As part of the "Zombie Squad" Cobra is the bottom line, doing the job nobody else wants to do. To my knowledge no other film brings the "no rules cop" concept to the forefront more openly than Cobra. Of course most action films in the 80s contain a hint of this notion and crowds (this author included) love when the good guy can finally take off the gloves and just win. But with scenes so up front in their message, Cobra almost stands out like a PSA against the downfalls of the current justice system. In a 1986 review The New York Time's Nina Darnton even goes as far as to say, "this film shows such contempt for the most basic American values embodied in the concept of a fair trial that Mr. Stallone no longer, even nominally, represents an ideology that is recognizably American." Whoa.

In the podcast Jim and I discuss this and other opinions of the film, taking a look back with 20+ years of reflection on an era where the people were looking to roll up their sleeves and start fixing the nation.

But the podcast is not all serious discussion! After all, Cobra is first and foremost an action film written by and starring one of our best known action stars from a decade famous for its over the top (no pun-intended) action films. It has one-liners, a new world order subplot, axes, and one of the best villain deaths ever caught on film. We touch on the importance of the soundtrack and branding of the film, which lead a young Jim DeSantis to walk around with a matchstick in his mouth and me to instantly purchase the soundtrack before even seeing the film based on the cover alone. We also talk about the strange career of director George P. Cosmatos and his involvement with Stallone and other well known Hollywood actors who wished to direct from behind the scenes. 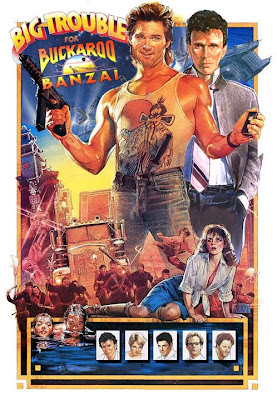 Media Potluck is proud to present, "Big Trouble for Buckaroo Banzai" on Saturday, May 29th 2010.

Two outstanding genre-bending comedy adventures in the same night!  Both of them mysteriously connected...

The Adventures of Buckaroo Banzai Across the 8th Dimension is one of the most influential sci-fi comedies of all time and a major cult classic. Released in 1984, directed and produced by W. D. Richter, Buckaroo Banzai combines a complex comic book plat with sharp whit and hard science for a wild ride. The film stars a ludicrous cast including Peter Weller, Jeff Goldblum, John Lithgow, Christopher Lloyd, and Ellrn Barkin. Thrill as Dr. Buckaroo Banzai renowned physicist, neurosurgeon and rock musician tears a hole in the fabric of space and time and accidentally ignites a war on Earth between two inter-dimensional aliens... a war that only he and the Hong Kong Cavaliers can fight. The film has influenced writers and filmmakers for decades including Wes Anderson, whose credit sequence in The Life Aquatic is an homage to this film.

Buckaroo flopped in theaters... and a sequel, Buckaroo banzai Versus the World Crime League was planned but never released, however, W.D. Richter was called on to write the scrip for John Carpenter's Big Trouble in Little China and there are some striking similarities... Namely that Big Trouble's nefarious villain, Lo Pan is strikingly similar to accounts of Buckaroo's arch nemesis, Hanoi Xan. Yes, for all intents and purposes, John Carpenter's legendary Kurt Russel kung-fu epic is the Buckaroo Banzai sequel that never was!

HERE'S A RECAP OF THE EVENT!