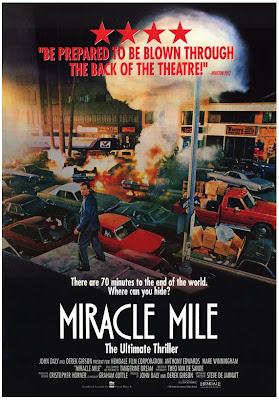 The 1980s yielded some very strange, just outside of the mainstream, films. Films that have a grandiose nature within a small frame, that deviate from the typical, Hollywood sensibilities of what should go in films and how they should be made - challenging subjects inside unlikely vessels. It was a time of experimentation. Films like Ladyhawke, After Hours, Buckaroo Banzai, even Ferris Bueller's Day Off would be hard pressed to see production today. Over the past two decades we've seen this territory approached, but very seldom reached, and in all this time there has been no more beautiful an enigma than Miracle Mile.

Miracle Mile begins with a very simple premise: Harry (Anthony Edwards) accidentally meets the girl of his dreams, Julie (Mare Winningham), and after a successful afternoon together plan for a date. Accidents happen and he misses it. The payphone outside the diner where they were supposed to meet is ringing, so Harry picks up... A frightened voice, who'd gotten the wrong number, tells him that nuclear weapons have been launched at the US, and there's only 70 minutes left. From there the movie takes a serious shift. If Harry really does have such a short time he wants to spend it with Julie, and he'll do anything to get to her. With everything at stake and nothing to lose, Harry, and any of the colorful crowd awake past midnight whom he shares his secret with, are capable of anything. Things get chaotically strange.

The film is a dark, dark comedy, playing off the increasingly bleak perspective of the period right before the iron curtain fell. It's also a romance, and a powerful one. It runs like a chaotic dream where you're constantly finding and losing what you're looking for. LA's Miracle Mile, is transformed from a fun and funky few blocks of city into a tremendous labyrinth. The art direction is astounding and the soundtrack by Tangerine Dream permeates the entire film, accompanying the atmosphere superbly.

The film was originally penned as part of the 1983 Twilight Zone Movie. At one time the script was listed as being among the top 10 best unmade screenplays. Writer and director, Steve De Jarnatt put a significant amount of personal funds and legwork into make the film happen. Not only was the script making film companies uncomfortable, but De Jarnatt didn't have much directing experience; only one previous film, Cherry 2000 (which looks awesome, but I haven't seen it), and writing credits for the Bob and Doug McKenzie movie, Strange Brew. Following Miracle Mile, De Jarnatt's career has been entirely in television. He's worked on everything from X-Files and ER to Lizzie McGuire. Here's hoping he returns to film someday. I'd like to see what else his mind can conjure up.

Miracle Mile is available on DVD, and is up on YouTube:

And if you want just a little taste of the flavor of Miracle Mile, check out these samples from Tangerine Dream's score: Many of you may have seen, or at least have heard of, the 1978 animated movie Watership Down. In short, it's an adaptation of the novel by Richard Adams about a group of rabbits who take heed of an apocalyptic prophecy and leave their home. On their journey they undergo many trials and confront a great evil in the form of a fascist regime of rabbits. It is very dark, heart-wrenching, and beautiful. If you haven't seen it, check it out. It is one of my favorite films, and easily one of the greatest animated features.

The story is about animal testing and the severe and brutal cruelties that can come from it. It opens with one of the main characters, a dog named Rowf, being repeatedly drowned and having the water pumped out of his lungs, you know, just to see. Rowf, and his friend, a dog called Snitter, escape the laboratory and search for a place to call home. Meanwhile, the lab thinks there's a chance that the escaped animals might be carriers of some deadly viral strains they were exparimenting with so they begin to scour the country side to exterminate them. This film is bleak and some really remarkably awful stuff happens, but it's a work of art and throughly compelling. It's basically the Dancer in the Dark of animated films.

After a long time the film was finally made available on DVD in the US, but it's not the full version, about 15 minutes are missing. The most recent international releases are the full 99 minutes. So whip out the region-free DVD player. If you don't have one, get one - there are plenty of good reasons. If that's not the road for you, you can always watch it on good ol' YouTube. 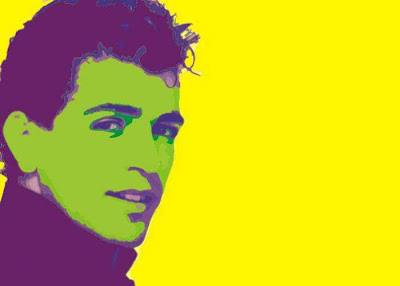 If you dip into the dance music world often enough you will one day find that a large portion of your favorite tracks were produced by the same person either under different monikers or as the "man behind the curtain" for a group of pretty models.

Such is the case with Bobby Orlando. His track record is extremely impressive, producing the Pet Shop Boys, Divine, Fancy, The Flirts, and the list goes on. Before I even knew who Bobby "O" was I was already blasting the Pet Shop Boys and Fancy and dying for more. So you can imagine that I was quite excited when I found out that there was one man behind these amazing jams.

Sadly there is not that much information on Bobby Orlando available on the interweb. There is no official site, just this outdated fan site, a Wikipedia entry, this rather in-depth article, and an article from the 80s painting Bobby as a semi-fanatical religious dance producer who creates so many songs because God has commanded him to. Personal theologies and adaptations of the scripture aside, the man produced an incredible amount of infectious songs.

"If a producer has the ability to put out that many records and he doesn't then he is disobeying God's command."

PS - I just found this website that seems to have a good amount of info on Bobby.

Orlando is credited as one of the founding fathers of euro/pop dance music. His productions are easily identifiable by their dense synthesizers, rolling bass lines, and resounding percussion. Orlando tracks showcase him playing multiple instruments including keyboards, guitars, drums, percussion and saxophone. The ringing cowbell percussion lines and robotic sequencers heard in “She Has A Way”, “The Best Part Of Breakin’ Up,” “Desire,” and “Native Love (Step By Step)” define the electrifying sound he pioneered.

Some videos for your enjoyment: