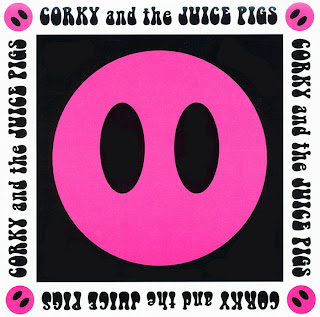 Comedic music is a fickle mistress. More than a few mainstream bands flirt with comedy, and some comedians have an impressive musical presence, but there are very few artists who deal exclusively in comedic music, leaving the genre for the most part overrun with one-off novelty songs. However, the comedic music world has recently begun to make something of itself. “Weird Al” Yankovic is, of course, still the king (and probably will be for the next century because the man doesn’t age) but, for the first time in a long time, he’s not the only player in the game. Tenacious D’s unprecedented success with their skillful musical compositions mixed with comedic antics paved the way for other new artists to join them. Recent acts such as Flight of the Conchords and The Lonely Island have taken television, Internet, and music listeners by storm with a consistency and integrity that suggests they’re here to stay. This sudden boon has even prompted older faces to return to the scene. The group that practically created the genre back in 1962, Bonzo Dog Doo-Dah Band, have recently reformed and the legendary Spinal Tap have come out of hiatus. Things are looking up for the comedic music world, but there are many brilliant acts who have burned out before their time and many more that have gone unnoticed. Among the greatest of these lost musical comedy groups is Corky and the Juice Pigs. Corky and the Juice Pigs were Phil Nichol, Greg Neale, and Seán Cullen, a trio of Canadian gentlemen blessed with powerful gifts: music and comedy. From 1987 to 1998 the band coupled cleverly composed musical style parodies, astounding witticisms, baffling weirdness, and insane improvisation into a beautiful goulash of sight and sound. Chances are you’ve heard at least one Corky song. Their immortal classic “Eskimo” still frequently makes the rounds on the Internet, though it’s commonly accredited to other comedy acts and is often under the punch-line revealing title “I’m The Only Gay Eskimo”. Perhaps an illustration is in order, so take a gander at this live performance of “Eskimo” complete with style parodies of the Proclaimers, Bob Dylan, Portishead, Ric Ocasek, Oasis, and Van Morrison:

“Eskimo” may be the band’s lasting legacy, but it’s far from their finest work. Lines like “I go out seal hunting with my best friend Tarka, but all want to do is get into his parka” only begin to scratch the surface of the Juice Pigs’ comedic prowess. They can go toe-to-toe with the best of those in their field. The Juice Pigs’ self-titled debut was released independently in 1993. Their folksy, predominantly acoustic comedy predates the similar traits of modern musical comedians Stephen Lynch, whom they surpass in cleverness, and the Conchords, whom the Juice Pigs have much in common with, though the Conchords are much slicker customers. “Corky and the Juice Pigs” is a twenty-six track long hodgepodge of short skits, short songs, and a few regular-sized songs. While there’s definitely some dead wood there is also brilliance, such as the sitar-fueled ballad to Indian food and romance, “Love Affair”:

“Truckers” praises life on the open road: “I’ve hauled a million tons of freight from Pheonix to Omaha and sometimes I fall asleep at the wheel and I kill carloads of tourists” and “Americans” is a tragically real parody of American politics, ethics, and patriotic ballads:

There’s even a mention of fighting a war in Iraq. Who would’ve thought this song would be even more pointed in 2009?The Juice Pigs may disguise their songs with unrevealing titles, but they’re quite blunt in their comedy. Any normal-seeming situation will quickly break down into insanity such as in the opening verses to their early track, “Pandas”:

Or the sophistication of their later works, like “REMember”:

I look over out of the window
I see your face
And I’m frightened
‘Cause I live on the eighth floor
And you must be really, really tall

“REMember” is a prime example of three of the band’s strongest suits – improvisation, style parody, and surrealism. The song starts inexplicably with a tranquil rendition of The Cult’s “She Sells Sanctuary” and then becomes a very unique R.E.M. parody. Rather than riffing off of any one of R.E.M.’s songs or tackling aspects of their more famous works, “REMember” targets the idea of R.E.M. Seán Cullen emulates Michael Stipes-esque vocals and spins a web of comical nonsense akin to the alt. rock band’s subjective lyrics. The Juice Pigs had practiced with this format earlier in their career with the song “Suzanne” - a Suzanne Vega parody not featuring a note of her hit “Tom’s Diner”, but lampooning its style of winding narrative. Both tracks make use of Cullen’s trademark improvisation which rambles to dadaist heights of humorous confoundment. When performed live these tracks are mostly raw improvisation from Cullen leading to varied results as seen in this performance:

The second track in the above clip, “BVG” (aka “Burn Victim Girl”) shows the Juice Pig’s subversive traits and their aptitude towards clever, short songs and skits. Their second album, 1994’s “Pants”, retools the presence of the first album’s skits and P.S.A.s into a clever unifying segway of changing radio stations that play in the pregap (negative numbers) between most tracks. This fun new take on skits is just one of the many aspects of “Pants” that makes it far superior to the Juice Pigs’ debut. In addition to tighter song-writing, the album has more complex production; allowing for a greater variance in sound and styles. “Pants”s title track, and first track on the album, flourishes their new complexity with a parody of early 90s dance hits complete with a wailing female vocalist and substituting record scratches with zipper sounds. “Come on everybody now/ men and women, young and old/ I can feel your pain/ …if you touch my pants.” In true dance fashion the track is remixed at the end of the album as “The Boot Cut (Pants Trance Dance Mix)”.

“Pants”’ diverse sound serves it well, from the ska-infused “Picnic Party” (about Third World nations having fun in the sun), to the melodic ballad “Dolphin Boy” (the tragic tale of a boy who abandons the land to be with his favorite sea mammals), the hard rock “Hot Squat Hombre” (about the kind of love only the vertically challenged can give), or the country-western weeper “Christmas Dreams” (scope out videos of the last two songs by clicking their links). “Pants is also home to “Janitor”, the Juice Pigs’ most brilliant and endearing style parody. In it, they riff off of fellow Canadian, Neil Young’s distinctive vocals and folk-rock sound to spin the story of an eccentric grade school janitor who “cleans the bathroom and tells dirty jokes …dresses like a woman and rolls his own smokes.” By now you’ve certainly noticed that most of these clips come from MADtv. Believe it or not there was a time when MADtv was good. During its first three seasons (1995-1998) the show was at its best - trying to do things better and different, while SNL was at an all-time worst. Corky and the Juice Pigs were the first musical guest ever featured on MADtv. They appeared nine times between the second and third season. This was where I first experienced them, prompting my middle school self to record every episode of MADtv so that I wouldn’t miss a performance. Beginning with the forth season, when the show started pumping in mainstream musical guests, as SNL does, it was the beginning of the end; not just for MADtv’s quality, but also for the band. The Juice Pigs’ appearances on MADtv were as far as they ever got to stardom. In 1998, while assembling new material for a third album, their record label, Denon, went belly-up and the band went separate ways. Two of their last songs “Phone Sex Girl” and “Too Fat to Rock ‘n’ Roll” (a Meatloaf parody) exist only as MADtv performances.

The Juice Pigs had a good run. Barenaked Ladies used to open for them back in the old days until the tables turned. After eleven years, two albums, many festivals, and an attention-getting number of appearances on American television, surely the band could walk away somewhat satisfied. However, things appeared to be looking up before the record company closed its doors, so what exactly led to the end of Corky and the Juice Pigs? I can’t seem to find any definitive word. Seán Cullen went on to pursue a stand up and acting career. You may have seen him on Comedy Central Presents. He still does musical improv and recently even did a comedy P.S.A., just like old times. Phil Nichol is also a comedian and keeps his guitar close in tow. He recently appeared on the Graham Norton Show celebrating an award from if.comedy. The band’s tallest member, Greg Neale, has faded into the mists of mystery. 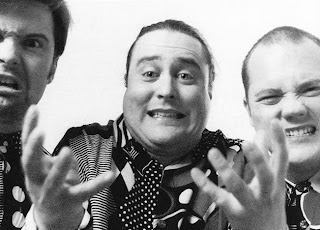 The Corky and the Juice Pigs’ albums have been out of print for a long time and have never been made officially available online. You can find their music floating around the Internet without too much trouble, additional videos continue to appear on YouTube, and there’s a long-running fansite good for soundbytes and additional info. Below is a taste of Corky’s porky goodness, from their self-titled debut and “Pants” - but that’s not all. Internet magic has also made available their extremely rare, only ever released on cassette, demo album “Buck A Song” which you can check out HERE.

Great blog. I loved these guys. Wish they would get back together. I think with some good material someone would pick them up.

Thanks for the trip down memory lane. :) I still remember the lyrics to Eskimo from their MadTV days, it's a damn good song.

gotta love those guys, why did they break up? i remember the skateboard song and panda song, and a few others, laughed my ass off and then they dissapeared....

Nice Guys. I liked your great blog very much. Thanks for sharing the informative information with us.

Really like this website, this really helps and very useful. Nice effort Keep up the good work.

Nice blog and nice post! The topic here I found is really effective.

I really appreciate the way you are sharing your experiences.

I read and walked for miles at night along the beach, writing bad blank verse and searching endlessly for someone wonderful who would step out of the darkness and change my life. It never crossed my mind that that person could be me.

You can view a never released (until now) 25 minute pilot for a TV series shot in '97 - which is still trying to find a home - by searching Liam Kiernan (channel) on You Tube. Gotta love these guys! They star in this comedy pilot: "A Little off the Top"

These guys were big in australia in the late eighties and appeared on a comedy programme for up coming comedy artists like the Doug Anthony All Stars (DAAS) several times. It was called the "Big Gig" on the ABC

REMember may not have been a direct song parody of REM, but i remember (HAHA) the impossible-to-find-online music video certainly was. It was basically a fairly direct parody of "losing my religion", up until the bizarre, um, i guess interpretive dance, or at least all of them wearing pajama pants and no shirt (including a goddamn pumpkin, IT WAS WEIRD) shaking in a line and then homoerotically piling on each other as the choruses progressed.

does ANYBODY know what i'm talking about????